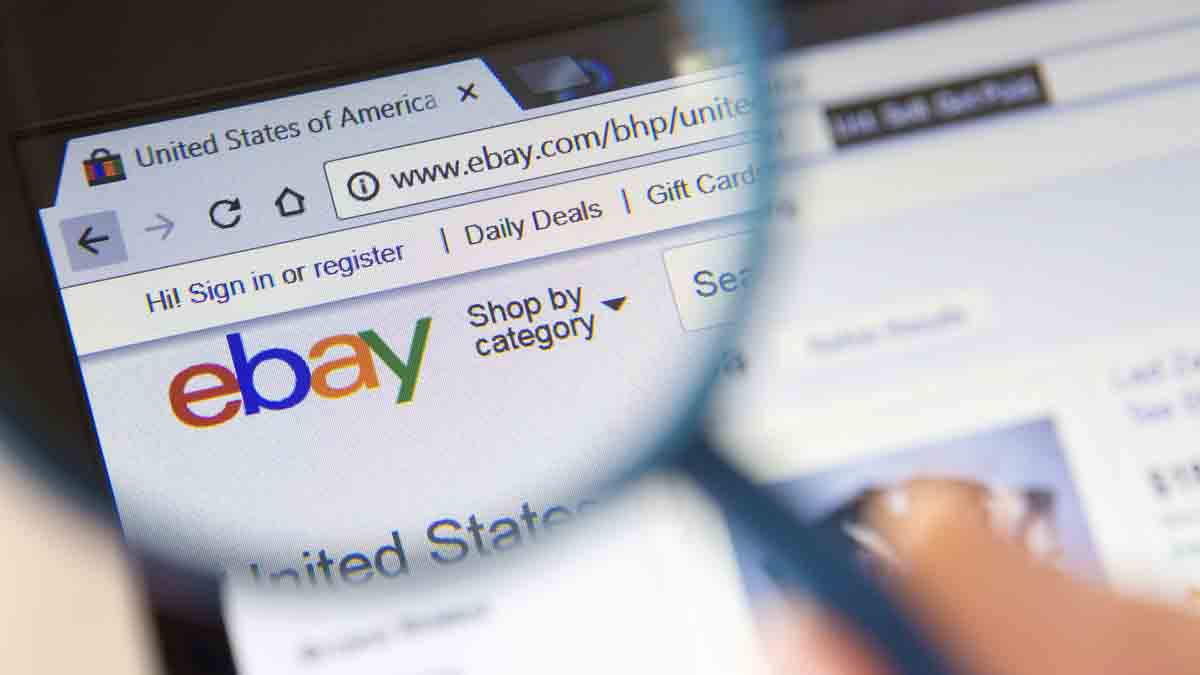 The survey’s main goal was to study how product titles characteristics, such as length, content etc. impact sales. The survey also sought to measure the various Ebay title optimization elements and how using keywords in the title affects the product's performances.

In this article, we will discuss a survey conducted by The Builder, which analyzed close to 1 million Ebay product titles in order to have a better insight into the online retail giant’s search engine.

The survey’s main goal was to study how product titles characteristics, such as length, content etc. impact sales. The survey also sought to measure the various Ebay title optimization elements and how using keywords in the title affects the product's performances.

These are the surveys findings

Ebay puts a limit of 80 characters on product titles, which sellers usually use to include keywords. The Builder’s survey found that the longer the title - the more it sells.

Since longer titles mean more keywords, this works well with Ebay’s search engine, which matches results by scanning titles for keywords that relate to the search query. 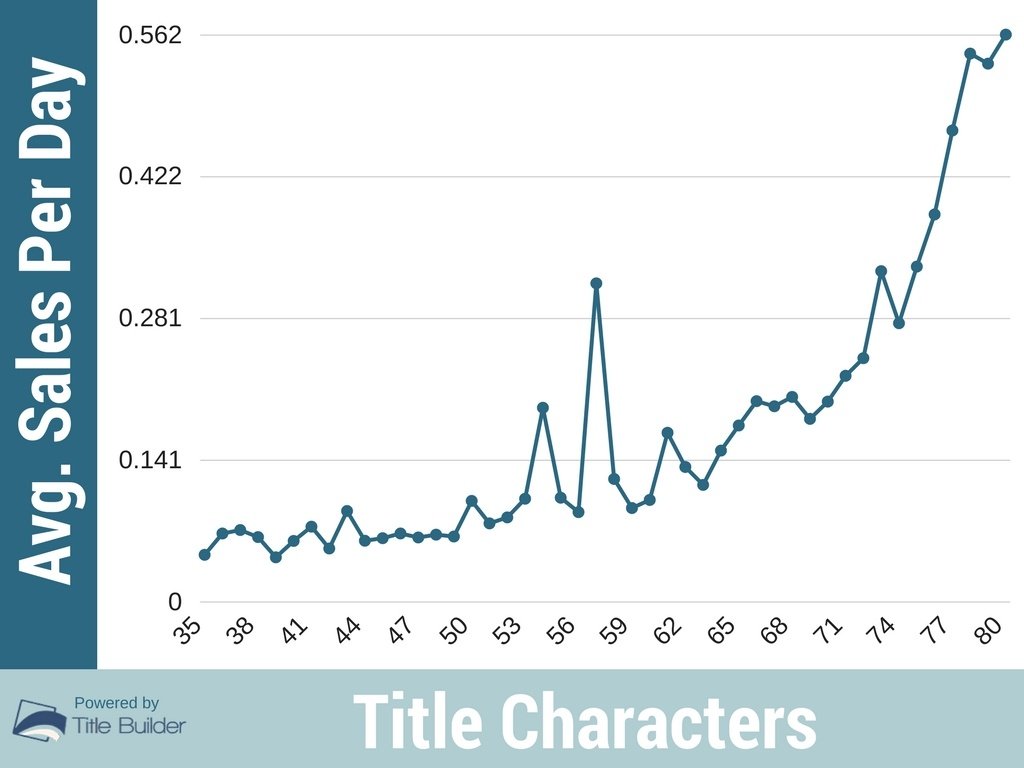 The Builder also examined how the number of keywords in the title affects sales. They found that most often product titles that included more keywords performed better on a day-by-day basis.

Ebay shoppers usually search products using keywords, so it makes total sense that using multiple keywords in the product title will help the product rank high in the search results.

It is recommended to use as many keywords as possible, but it is also very important that they will be relevant to the product on sale. 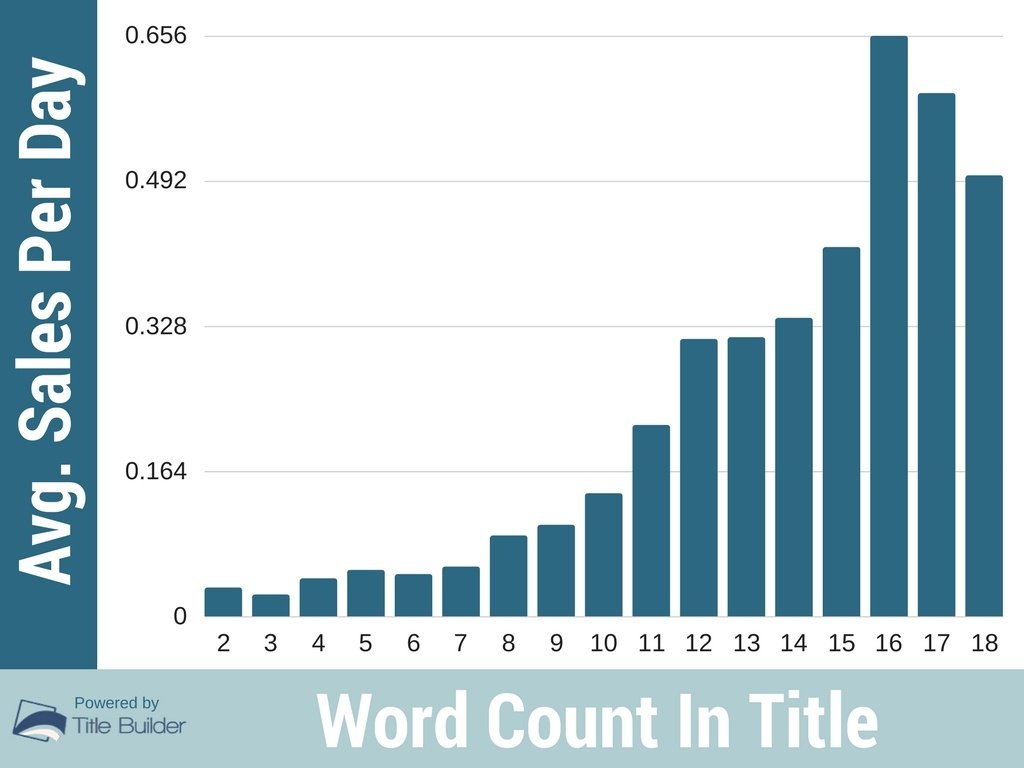 The Builder compared two product titles for the same product by two different sellers: Seller 1 included in the title 9 keywords that were copied from another platform, while seller 2 used 12 generally popular keywords. 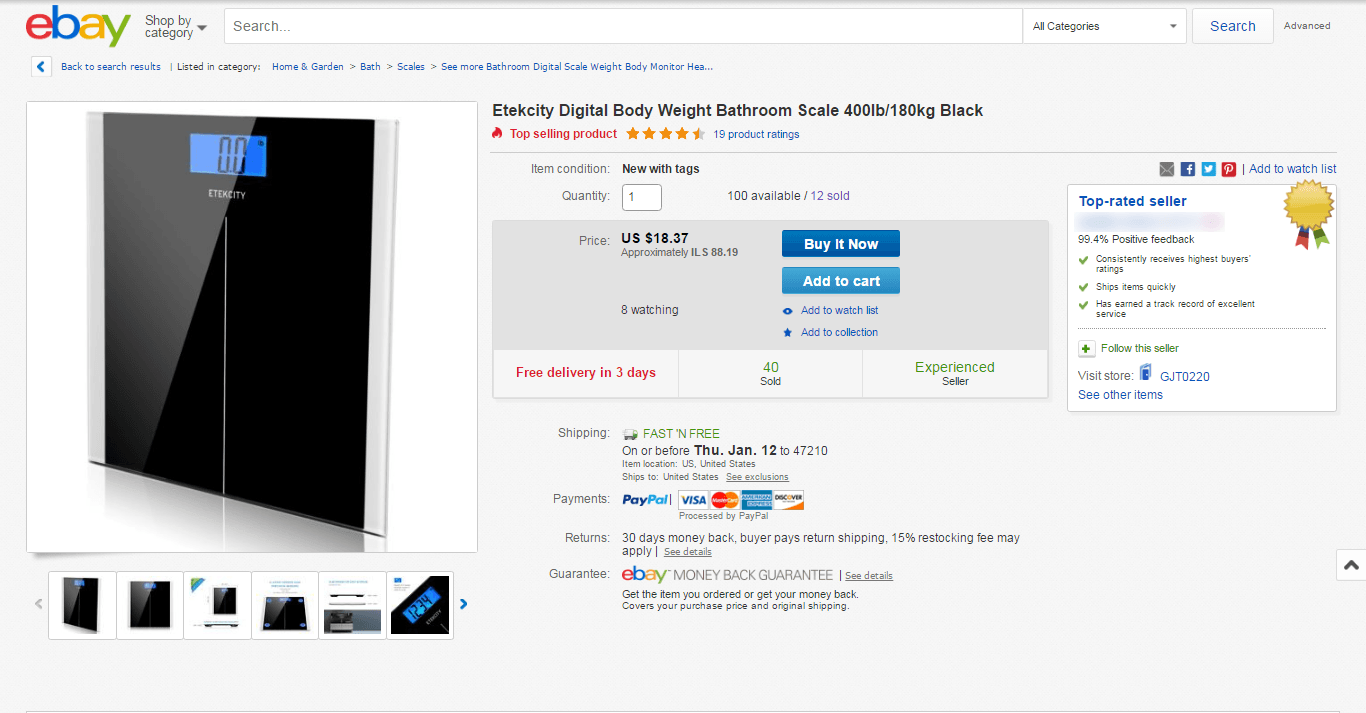 Of course it is important to let shoppers know whether the products we sell are new, used, refurbished etc. Many sellers find it so important to note that they include the word “New” in the product title, in addition to the listing form.

However, according to the data collected by The Builder, surprisingly, products whose title did not include the word “New” actually performed slightly better on a daily average.

Surprising as it may be, it seems that it is better to use the title characters for other keywords, rather than using “New”. 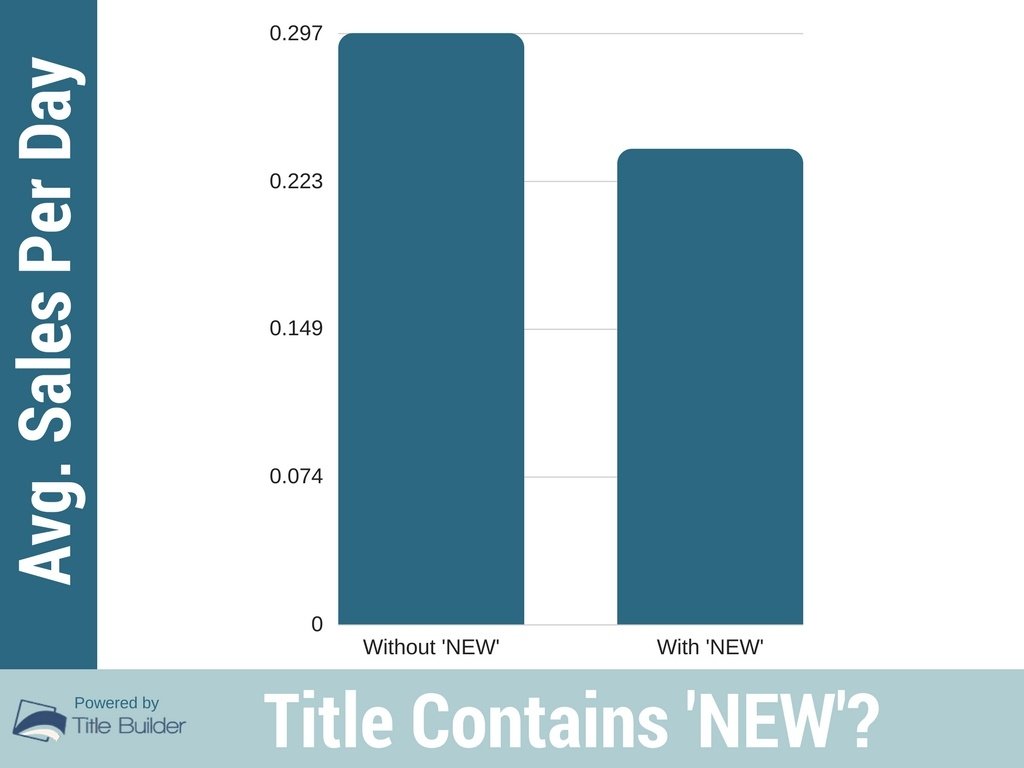 Because Ebay put a limit on the number of characters allowed in the title, many sellers save up title space by adding specific acronyms, such as NIB (New In Box) or NWT (New With Tags). However, the survey suggests that using these acronyms does not help sales at all, the title space will be better used for popular keywords instead. 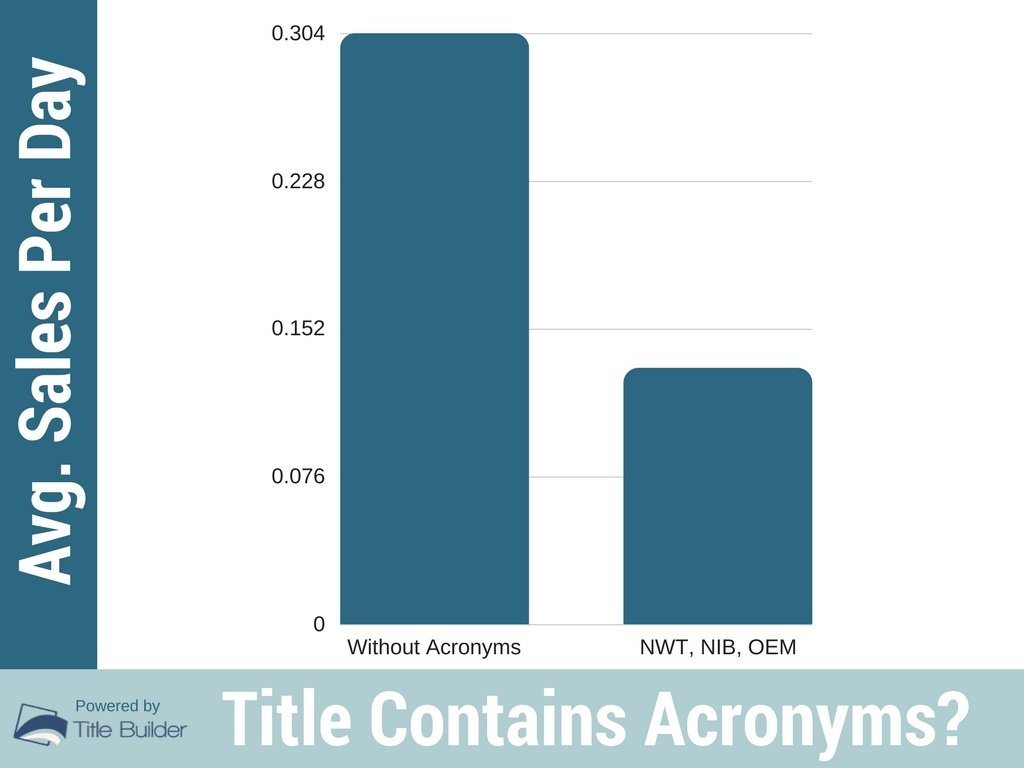 The results show that products whose title did not contain acronyms performed better on average in terms of sales. The reason for this may be that these acronyms are from a bygone ebay era, and today’s users no longer use them in searches.

When creating a new product listing, sellers should include as many item specifics as possible. These include size, material, color, type, and other attributes. The more of the item specifics are provided, the better ebay search engine can match it to relevant queries.

The survey found that, in contrast to “New”, adding the item specifics as keywords in the title actually drive up sales. 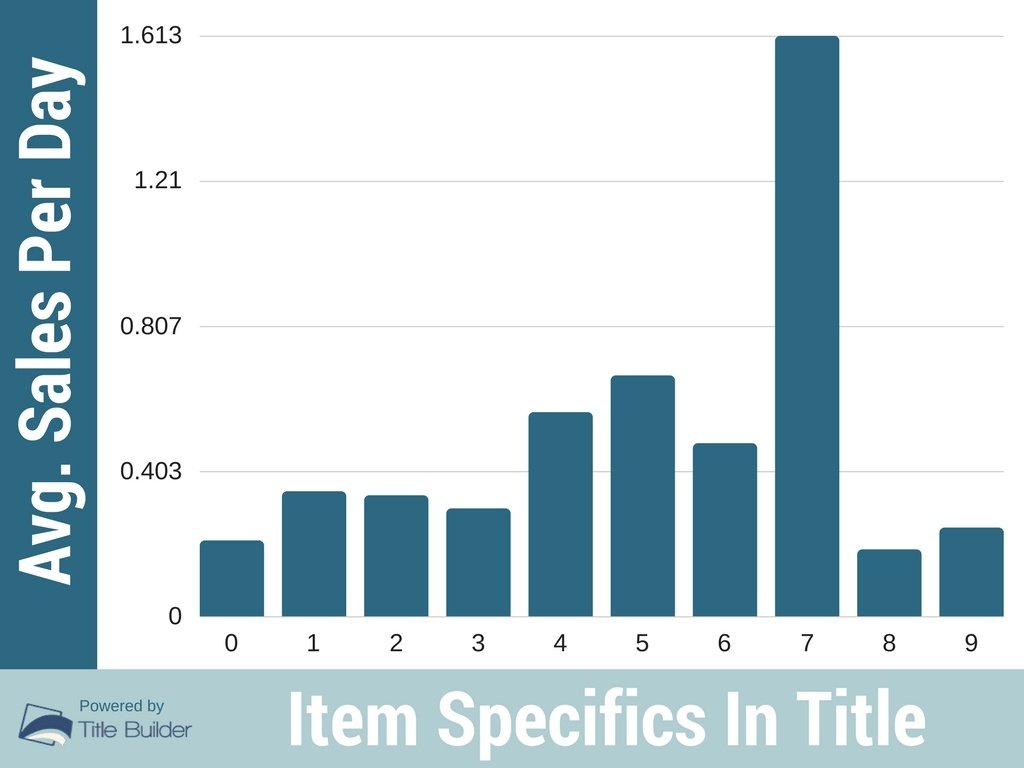 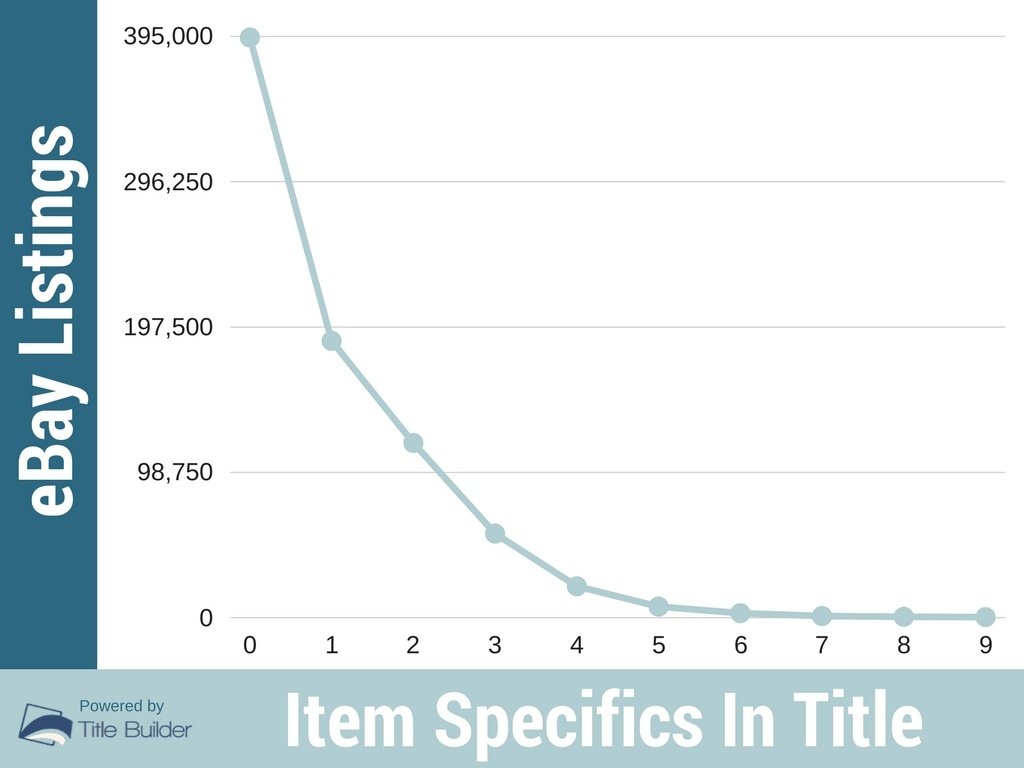 Among the many known brands sold on Ebay, there are many private labels, who lack the reputation and drawing power of the better known brands. While adding “Nike” to the product title can be advantageous, no one is searching for a little known brand.

The survey suggests that sellers should consider removing the lesser known brands from the product title, allowing room for more keywords, and placing the brand in the item specifics. The data points that such product titles perform better on average. 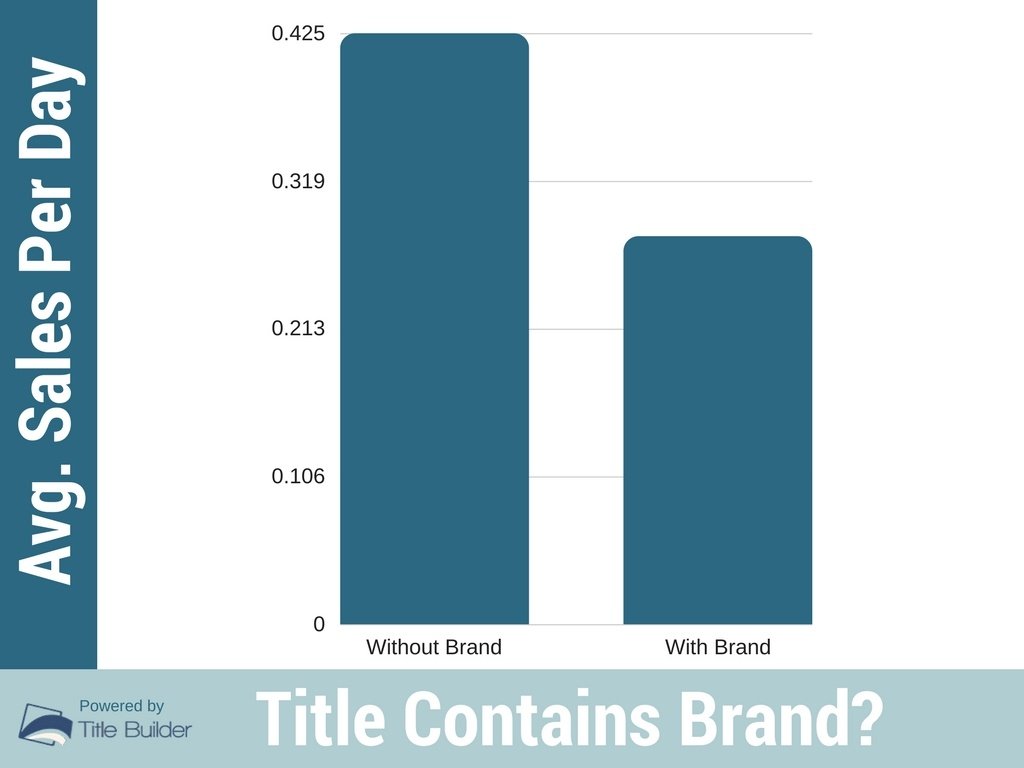 It is important to note that Ebay’s search engine does not search subtitles, so using keywords there is not helpful. Instead, subtitles should be used for direct marketing efforts, to engage the potential customer and encourage him or her to click through.

Sellers should consider the costs, and if they are able to afford it, add subtitles to listings to boost sales.

According to the survey, the average product title on Ebay contains 64.4 characters and includes 11-12 keywords. 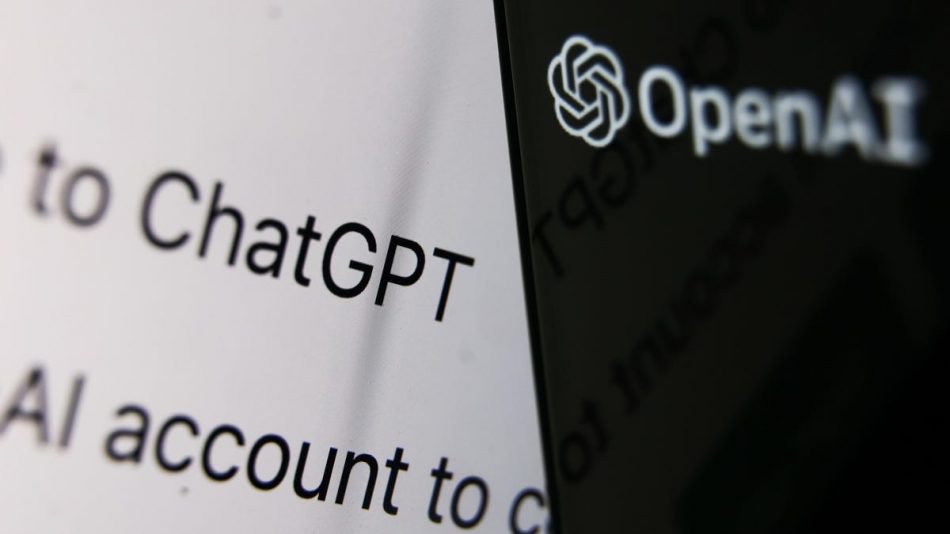 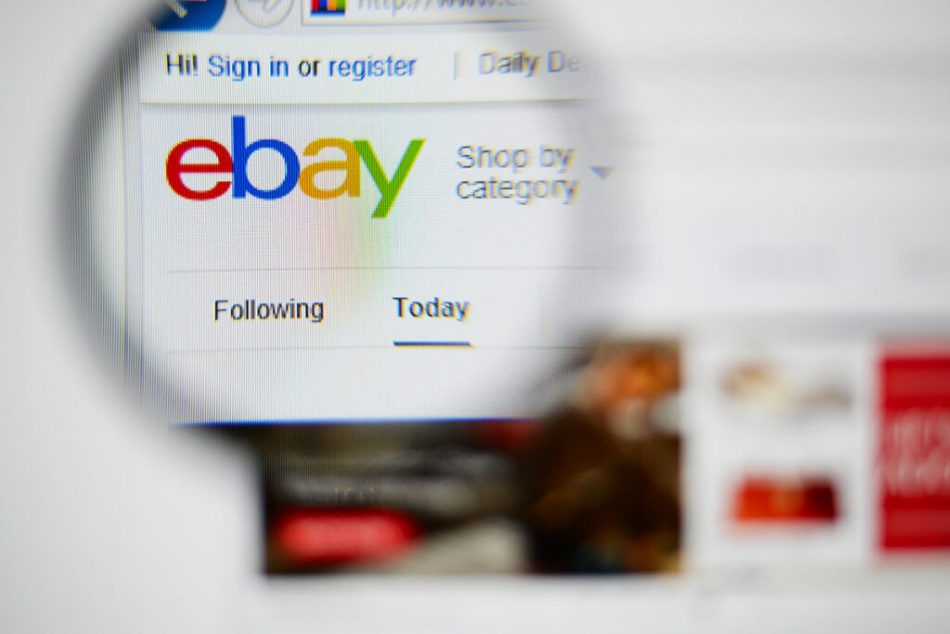 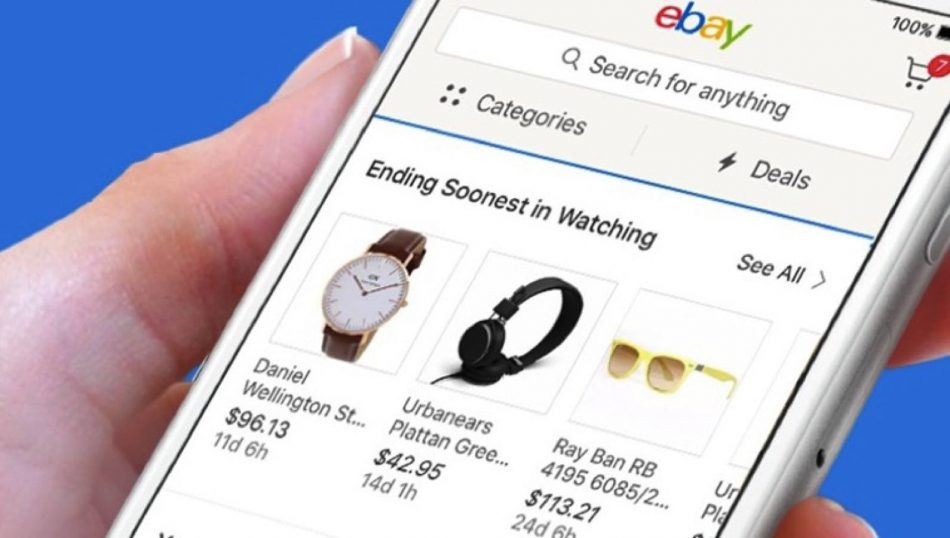